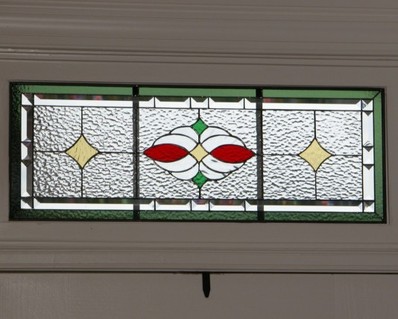 Entry transom in 3 sections divided by 2 mullions (grids). Featured is a 13 part star bevel cluster with color accents of green, red and light amber in the center. Flanked on either side with a single amber star. A double border of darker (olive green) and a clear bevels was used. The background glass is sparkle. We came to this home to add a decorative addition to the transom above the front door (Jaecklein Color Transom). When we finished with the rough design, the owners asked us to price the four transoms leading to the patio. These four transoms provided light to the family room, but the view was directly into the ceiling of the patio. It was a great place to add an additional decorative touch which would add interest to the room. The four transoms have a double border with olive green and clear bevels. Clear bevel stars flank a color accent star in each center (red and light amber). Water glass background.  We used the same border treatment as the front door transom and used the same clear bevel stars. Since the area was less formal than the entry, the center design remain simple but with a touch of color. Since both areas could be viewed at the same time, the colors used were the same.

This townhouse in a gated planned community is strictly supervised as to the outward appearance of each home. Since our glass is applied to the inside of window (just like drapes or shutters which are not regulated) there were no issues placing this glass in the entry. Additionally, during the day most of the light is entering the home, so the transom (even with color) is barely noticeable. Of course at night the opposite is true, but the exterior architectural features are in the dark, so there really is no conflicts presented to the homeowner or community.

When we finished, the owner remarked how much it reminded him of the homes where he grew up in Boston.